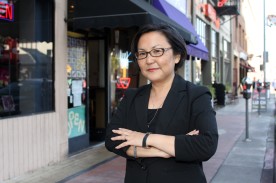 Today is the launch of Naomi Hirahara’s latest Officer Ellie Rush novel, GRAVE ON GRAND AVENUE. I was lucky enough to interview Naomi earlier this year. Here is a little taste:

[Naomi Hirahara interview excerpt] You also recently published MURDER ON BAMBOO LANE, the first book in a new mystery series featuring a 23-year-old LAPD bicycle cop. How does that book differs from the Mas Arai books? Was it freeing to write a mystery featuring a different lead character?

While I was finishing my fifth Mas Arai mystery, my father passed away. In a way, it was a blessing to recall and memorialize his

history in his hometown in Watsonville, but I also knew that I needed to embrace a younger character. Around this same time, I taught a creative writing class to UCLA undergraduates and I fell in love with them. I also had been part of the ATF Citizens Academy, and those two experiences — teaching college and law enforcement — led to the creation of a 23-year-old bicycle cop. This series is in first person. It’s a breezy, fun read.  It’s more about a young woman trying to find her place in the world, despite criticism and doubt from her family and friends.  The advantage of writing about someone working in law enforcement is that it’s easier to explain why the character is encountering dead bodies! But my Ellie Rush is a patrol cop on a bicycle, so there are still elements of an amateur sleuth in the series.

S.W. Lauden is a writer and drummer living in Los Angeles. His short fiction has been accepted for publication by Out of the Gutter, Criminal Element, Akashic Books, QuarterReads and Crimespree Magazine. His novella, CROSSWISE, will be published in 2015. He is currently putting the finishing touches on his debut novel, BAD CITIZEN CORPORATION. You can read one of his recent short stories right HERE.