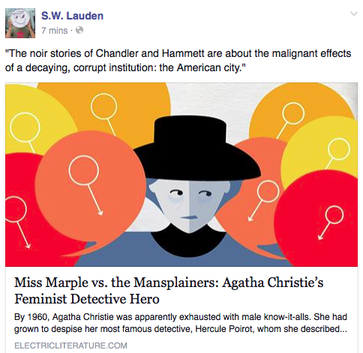 “All our criticisms of genre fiction—that it relies too much on the sensationalism of a shocking plot; that it is unwieldy and messy; that it is too contemporary, resisting the classic’s tight-lipped timelessness; that it appeals too much to its audience’s emotions—sidestep the fact that the novel began as a popular form, one as potentially mind-rotting as TV, comic books, or Candy Crush.”—Alice Bolin at Electric Literature

“My theory is that authors are no less opposed to making money any other type of professional; it’s the transaction that freaks them out.”—Jim Ruland on LitHub

“Whether it’s borne out of some kind of bizarro escapism or the desire to see the dark mind confirmed and confined on the page, the urge to read and write dark fiction has been steady in my life.”—Amelia Gray at Publishers Weekly 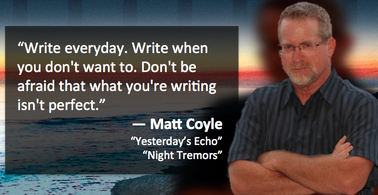 “Write everyday. Write when you don’t want to. Don’t be afraid that what you’re writing isn’t perfect. It’s not, but it’s going to get better.”—Matt Coyle at Bad Citizen Corporation

“Nothing makes an author as happy as finding a new reader at an event or meeting a fan who connected with our books. And most authors will be legitimately upset if they learn they’ve inadvertently hurt your feelings and will want to make it right.”—Delilah S. Dawson at whimsydark

“Sequencing a short story collection is pretty analogous to sequencing an album or a mix tape. The process largely depends on the balance between familiarity and change, of fulfilling the reader’s desires, while also challenging them.”  —Nathan McNamara at Electric Literature

“I don’t feel I’ve really achieved much in writing yet. Writing’s another expression of art, really, that I’m just kind of discovering as I go.”—Duff McKagan at Seattle Times

“Taking the time to re-experience the art we loved best in our past can be a way of spending time with ourselves, and though its rewards are mostly unseen, that may make them all the more important to seek out.”—Sarah Seltzer at Flavorwire

S.W. Lauden is a writer and drummer living in Los Angeles. His short fiction has been accepted for publication by Out of the Gutter, Criminal Element, Akashic Books, Spelk Fiction, Shotgun Honey and Crimespree Magazine. His novella, CROSSWISE, and his debut novel, BAD CITIZEN CORPORATION, will be published in 2015 and 2016.