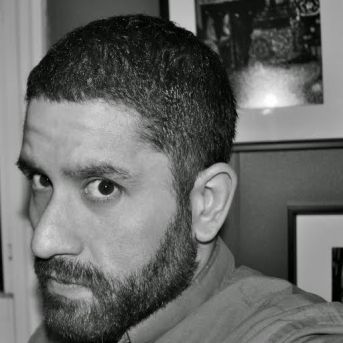 What: His Derringer Award nominated fiction has appeared in multiple print and web publications. Book reviews have appeared in My Bookish Ways and he is an editor for Shotgun Honey, a flash-fiction website focused on noir, hard-boiled, and crime crime stories. Debut novella, THE FURY OF BLACKY JAGUAR out in July from One Eye Press.

I just read THE FURY OF BLACKY JAGUAR in one shot. Totally couldn’t put it down. What dark corner of your soul did the title character emerge from? Where does he go when you’re not writing about him?

Great question. Blacky isn’t necessarily my id, but he’s definitely a creature of impulse. I wanted to create someone dark, but cartoonish enough to love, if that makes sense. Most of Blacky’s decisions are by the seat of his pants and most definitely low-hanging fruit. Though, in the story, we do see Blacky has sort of a moral compass. This doesn’t excuse the things he does, but in most cases you’d have a beer with the guy.

That second part, I can probably answer that better when I’m actually not writing him! I’m currently working on a new Blacky story for the Thuglit Christmas anthology due out later this year. This crazy bastard won’t leave my brain, man. 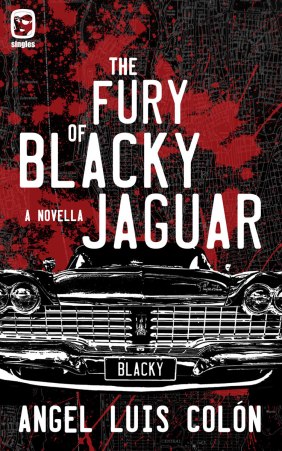 The Fury is straight up cribbed from Stephen King. The film translation of Christine was a guilty pleasure growing up, so using the same car (though, the model released a year after the famous ’58 Plymouth Fury from King’s story). In that case, I guess Blacky gets to own my dream car. As for the nickname, that’s a close-kept secret of Blacky’s that I may or may not ever reveal. Safe to say, the name ties into why he does what he does in the back end of the book upon discovering Osito’s side business.

The Bronx really comes to life in this novella. Why is New York an ideal setting for a story about an ex-IRA hard man? Will Blacky be hitting the road and visiting other cities/states in his future adventures?

A lot of folks don’t realize just what an amazing animal The Bronx is. I grew up in multiple neighborhoods there, all of which pop up in the novella, all of which have this strange, ever-present grime built up over the years by the myriad of people that passed through, lived there, and died there. I know we get a rep for being brash, loud, and angry…which is mostly true, but anyway, why is it an ideal setting for a guy like Blacky? Blacky fits right in. The Bronx is a home for loveable scoundrels—folks who are working a hustle on the side or at all times. I like to think he’s more at home there then in Ireland.

As for moving out of The Bronx, Blacky’s got a part in the novel my agent’s gearing up to send into the wild. He gets to visit Yonkers and the East Village (as a supporting character AND as a surprisingly calm version of himself). In the Christmas story I’m writing, Blacky’s visiting a podunk sticks town in Florida that’s actually called Christmas. He’ll be finding his way to Alabama soon enough in a story I only have a title for: Blacky Jaguar vs The Kool Klux Kult. I imagine that title might have to change at some point, we’ll see. 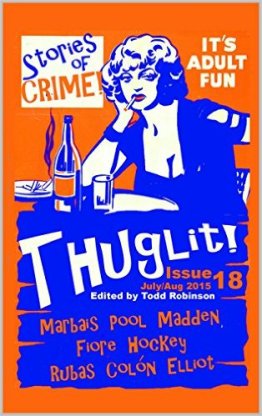 Prior to writing this novella, you were best known for your short fiction. How did writing and publishing short fiction prepare you to write the novella? What did you find surprising about writing longer form fiction?

I’ve said it before: short fiction is your circuit training. Never skip it.

I’d say one of the biggest challenges in writing longer fiction is trusting your instincts. When you put together a flash or short piece, it’s a little easier to trust yourself since you’re playing in the shallow end of the pool. Chances you’ll drown are slim so long as you’re not acting like an asshole. Once you get in deeper, well, now you need to pay attention while depending on that muscle memory. Once you over-think you panic and then, glub, you’re face down in the water.

Maybe trying too hard with that one, but I like it, so it stays. SEE? Trust your instincts.

My first published story is a 500-word flash piece called BIG MOUTH. I love it, but it’s pretty much a joke—not in the negative sense, but in the format: set up, meat, punchline. It’s still special to me, though, because for one, it’s my first published piece and second it was the first time I cracked the code with writing a proper flash piece that provided a satisfying story. That’s vital to not only honing craft but for confidence.

Shotgun Honey Managing Editor Ron Earl Phillips has joked that acceptances have declined 10 percent since you came on board as an editor this year. What do you look for in a good piece of flash fiction? Are you harder on yourself as a writer than you are on the writers who submit to Shotgun Honey?

I’ll say it loud and proud: I’m a dick of an editor and as cliche as it sounds, it’s because I love the craft and truly want every writer that submits to Shotgun to learn from their rejection or acceptance. A good piece of flash fiction needs to be first and foremost a story. You wouldn’t believe how often we get scenes or vignettes. Those are not stories. I want something original. Something that pays homage to our influences without being just another noir/hardboiled/crime story. We’ve all seen Chinatown and Justified or read The Big Sleep—do something that turns it all upside down and sideways. And some inside baseball: for the love of God, never end your story with the title.

I also recommend people read their flash out loud. You need the piece’ to come off like a good bar or dinner story a friend would share; quick, interesting, and with a good rhythm. If you lack that, you lose your readers.

As for whether I’m hard on myself—I’m awful to myself. I’ve revised flash pieces upwards of twenty times and fought with myself over two or three extra words. No matter how mean folks may think I am with Shotgun submissions, they’d think I honestly hated myself if they sat in on a writing session in my office. 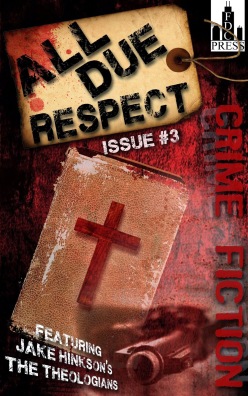 Aside from Shotgun Honey, what three short story markets would you advise new crime writers to read and submit to? Why?

For short stories: If you’re serious about this pursuit and can grow the skin thick enough for it? The three I’d recommend: Thuglit, All Due Respect, and Spinetingler. Some of the best crime fiction writers have come out of those markets. Seriously, go check out past issues or stories. You’ll see a ton of incredibly well-known and talented people. The folks that run those places are devoted and some of the most intelligent readers and editors you can work with. Thuglit, especially. I love being edited by Todd Robinson—I really mean that (read the Todd Robinson interview HERE).

I had the good fortune of hanging out with you in the bar at Left Coast Crime this year, and discovered that you are one hell of a story teller. How does that skill influence your writing? How does it influence your readings?

LCC rocked, didn’t it? Such a great event.

To answer your question: it’s the Bronx mouth, 100%. We strive to be the loudest assholes in the room. Luckily, it’s provided what I’ve been told is a decent voice in my writing. As for reading, I strive to make it as close as I can to a very one on one experience. As if we’re standing at the bar and I’m leaning in to tell you a dirty joke. Those are the stories that thrive—the ones we tell in secret and make us laugh. So I shoot for that. Sometimes I miss, sometimes I don’t. It is what it is. 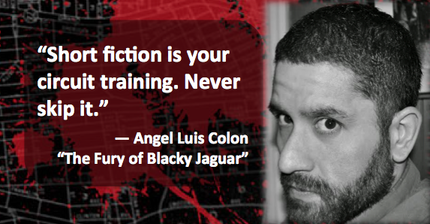 If somebody came to your house, what three books would they definitely see on your book shelf? What three albums would they find in your music player device thingy?

Books: THE GREAT AND SECRET SHOW by Clive Barker, THE HITCHHIKER’S GUIDE TO THE GALAXY by Douglas Adams, and GET CARTER by Ted Lewis—all huge influences on me.

I’ve got a few short stories coming up in the latest Thuglit, the Protectors Anthology due out later this year, and one or two other to-be-announced anthologies. I’m digging to find a market for a novella I wrote earlier this year called NO HAPPY ENDINGS. It’s sort of Thief meets Snatch with a little Ichi the Killer influence (very minimal).

My agent’s gearing up to start submitting my novel HELL CHOSE ME too.

With Blacky about to release—let me say: I’m terrified.

Also, excited! It means a lot to get my words out to the people who not only enjoy my work, but create and add to this scene. It’s been an awesome trip so far.

S.W. Lauden is a writer and drummer living in Los Angeles. His short fiction has been accepted for publication by Out of the Gutter, Criminal Element, Dark Corners, Akashic Books, Spelk Fiction, Shotgun Honey and Crimespree Magazine. His debut novel, BAD CITIZEN CORPORATION, will be published in 2015. His novella, CROSSWISE, will be published by Down & Out Books in 2016.