What: Author of the Mike Dalmas and Noah Milano books. He blogs about PI fiction at Sons Of Spade, and founded the Hardboiled Collective, a group of hardboiled writers promoting the genre and their books. He’s also a big fan of rock music and comic books, blogging about those as well.

I just read one of your recent novellas, THE DEATH BUSINESS, featuring a recurring protagonist named Noah Milano. How would you describe him to somebody who has not encountered him before?

Noah Milano is the son of LA’s biggest mob boss. When his mother got shot he promised her just before she died he would go straight and become an honest hardworking man. So, he breaks ties with his father and goes to work as a security specialist. He’s always trying to make up for his dark and criminal past. He can be a cocky wise ass, is a good fighter, loves rock music and is loyal to his best friends, Tony and Minnie.

I have published about 25 stories featuring Noah Milano. A lot of them on webzines (collected in TOUGH AS LEATHER), some as ebooks. I wrote one full novel, THE WHITE NIGHT SYNDROME, and now publish his adventures as novellas. I like the shorter form because I follow the Elmore Leonard rule of leaving out the parts people skip, making for shorter stories. Also, I like my stories to move fast, like a punk rock song. Too often I read novels where a third of it seems to be in the book to up the page count without much contribution to the story.

How did you come to choose the name Noah Milano? Is there any special significance to it?

There’s no special idea behind the name. I got the name Noah from a character in, of all shows, Beverly Hills 90210. They had an actor who I could envision as my protagonist. Milano because I used to have a crush on Alyssa Milano.

You are a Dutch novelist who often writes in English. Why do you prefer to publish in English instead of Dutch?

All of the stories I love to read are written in English, so it made sense to write in English myself. Also, in the Netherlands there’s no market for hardboiled detective stories. Writing in English opens up a way bigger market.

I think I was drawn to the genre after watching an episode of Spenser For Hire, after which I read the Spenser books. I just loved the lone wolf, wise cracking tough guy. Spenser seemed to be everything I wanted to be.

After having read all the Spenser novels I looked around for something like that and started to read Robert Crais, Raymond Chandler, Les Roberts, James Lee Burke… And I was hooked. Hardboiled detective stories can have action, romance, comedy all wrapped into a good story. But I guess what I like most is just walking along with cool characters. 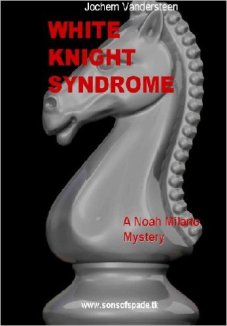 You are also a rock journalist. Do you specialize in any particular genre of music? Do you see any similarities between publishing genres and recording genres?

I specialize in metal and punk rock, my favorite genres. Publishing and recording genres both have great artists that give fans exactly what they love about a genre—the genre staples—but add their own identity and spin to it. Both have loyal fan bases, great communities, passionate and approachable creators.

You and I originally bonded over a shared love of punk rock. What are your five favorite punk bands of all time? Why?

I love the sense of passion of Ignite and BoySetsFire. The social conscience of Rise Against, the positive attitude of H2O, and the melody of Bad Religion.

If you had to compare Noah Milano to any punk rock musician, living or dead, who would it be? Why?

I guess Joey Ramone. Because he’s so very cool. 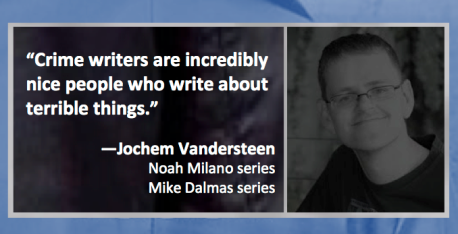 You do frequent author interviews on your blog, Sons Of Spade. What have you learned about writing crime/mystery from interviewing other authors?

I really learned how to promote my work. In general, I’ve learned that crime writers are incredibly nice people who write about terrible things. All the authors I have interviewed were more than happy to answer my questions, and help me out whenever I need my work promoted or some advice.

Since it is almost Christmas, what one crime/mystery book would you choose to give out as a gift this year? Why?

SILENT NIGHT, the Spenser Christmas novel, would be a fitting gift.

S.W. Lauden’s debut novel, BAD CITIZEN CORPORATION, is available now from Rare Bird Books. His novella, CROSSWISE, will be published by Down & Out Books in March 2016.