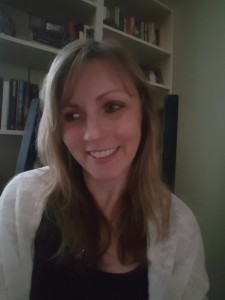 What: Her short stories have appeared in Thuglit, Needle: A Magazine of Noir, Crime Factory, Beat to a Pulp, Protectors, Pulp Modern, Trouble in the Heartland: Crime Fiction Inspired by the Songs of Bruce Springsteen and many others. She has contributed to the Los Angeles Review of Books and is one of editors of Shotgun Honey.

I just read your excellent short story collection, CANNIBALS: STORIES FROM THE EDGE OF THE PINE BARRENS. How did this project came together?

I’d always wanted to do a collection, but I found that just writing for a collection was really difficult. So I put my goal aside and just wrote my stories. After a few years, I found that I had enough, and that I was happy with every story—not just sticking in some filler tales—I had my collection. Then I met Eric Campbell from Down and Out Books and I pitched it to him and it was a go. 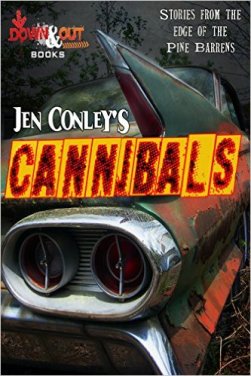 The stories in CANNIBALS are set in central New Jersey, but while reading it I had to remind myself that this wasn’t Southern Gothic literature. Was that by design?

I think there was some design in it, sure. I’ve always been interested in Southern Gothic. I’ve also always read a wide variety genres—not just crime fiction—but I’m very drawn to stories/novels/movies/television that take place in rural places, whether it be the South or anywhere else. And I especially like stories where the lack of money is present. If there’s no money, opportunity is sparse. It puts characters in difficult situations, forces them to make choices between morality and survival, and I find that extremely compelling. And because I’m interested in this idea, it probably drives my own story ideas, giving it a Southern Gothic feel.

Several of the stories feature extremely vulnerable protagonists. What is it about vulnerability that is appealing to you as a writer?

It’s just a natural go-to. It might be because I’m a woman. Most books and movies don’t scare me but real life does. Not bugs and spiders and that type of scare, but when I’m alone at night. I’m very independent and I’m not afraid to go into new situations, etc, but I don’t like being out late by myself. I could get a flat tire and be stuck on the side of the road. That’s happened before and it’s scary as hell being stranded in the middle of nowhere, or where everything is shut down, especially at night. (Thank God for cell phones.) I don’t even stop at stores late because I’m afraid some crazy might follow me home. If my son is at his dad’s house and my fiancé isn’t around, and I’ve got the house to myself, you can bet I’ll be up several times investigating every stupid noise. It doesn’t help that I write crime—because not only do I investigate, I start spinning stories in my head of all the terrible things that can happen to me. I’m exaggerating a little, but just a little. The truth is, fear is never far from my brain—I think many women feel this way—and when you experience heavy doses of fear and you’re a crime writer, vulnerable characters are probably an instinct. At least for me it is.

There is also a lot of talk of bogeymen—cannibals, Jersey Devils, and the like. What role do these classic storytelling monsters play in your own storytelling? Is it about tapping into the childlike, primal fear?

I do write kid characters a lot and I think when you tend to write about kids, you tend to reach into your own childhood, your own primal fears. I also like horror and when I tell people I write crime with a dose of horror, it’s probably because I’m not only doing crime fiction, but I’m also reaching into fear, usually fears we had in childhood, which is where my “monsters” come from. Even though I spend my life being scared, I love scaring other people. I’m probably, at my core, very sick and twisted in this sense. Who writes stories about being scared when you know you will probably scare yourself?

You have also worked as an Acquisitions Editor for famed flash fiction website, Shotgun Honey. How did you land that role?

I published three stories with Shotgun and one day I got an email from Kent Gowran, or maybe it was Ron Earl Phillips, asking me if I would like to come aboard. I was shocked, like really shocked, but I said yes right away. I loved the stories Shotgun was publishing and to be asked to help edit was very flattering. Of course, I think I sent back a long email about how

although I’d never edited before, but I had been writing a long time, had been involved with two writing groups, one in New York City…. I was trying to assure them I was the right person for the job even after I had been offered it. I’m such a goofball.

What has reading/editing the short fiction of other writers taught you about your own writing?

I think it’s helped me edit my own work more closely. I don’t mean copy edits, although I do tend to make dumb mistakes. What I mean is that sometimes we’ll get a decent story at Shotgun but the arc might not work completely, the story isn’t tight enough. It’s taught me to slash the unnecessary stuff. And to always send out your best work. We see a plenty of stories that aren’t fully developed yet. The writer hasn’t let the story sit long enough. I highly recommend writing groups but if that’s not possible, then you need to put your story aside for at least two weeks and then return to it. Personally, I have stories that I wrote a year ago, or years ago, and I haven’t worked on them because frankly, I’m just not that into them at the moment—whether that’s because the plot isn’t working or I’m bored or I’m not confident in the storyline or the writing. I might change my mind later and go back to it or I might not. I know this goes against the rule of FINISH THAT STORY OR BOOK NO MATTER WHAT but I don’t really agree with this. Some stuff just isn’t meant to be out there. Or it’s not meant to be out there yet. 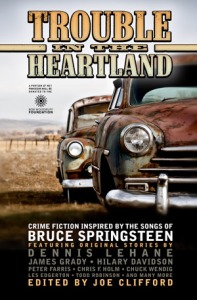 You’ve published short fiction with some impressive magazines, websites and anthologies. What is most appealing to you about the short form?

I have always loved short stories. I think it might have something to do with the fact that I’m very impatient and I want to get to the end of something fast. With novels you can’t do that. But I also think with short stories, you can really admire the writing. Sure, in novels you can do the same thing, but personally, I think you have to be careful about being too “writerly” in a novel. It can wear the plot down. This is just my opinion, though. I just don’t like being aware of the writing in long novels, unless I’m having fun, like Junot Diaz’s OSCAR WAO or David Mitchell’s BLACK SWAN GREEN (I love that book!). With short stories, there is time to step back, notice how a writer presents a scene, organizes dialogue, a wonderful line or two about description. I enjoy that. With novels, I don’t have time for all that.

Is there a Jen Conley novel in the works?

Yes. I’m writing a book about a woman who gets involved with a bad guy. I know that’s vague but when I pitched this line to one of my best friends, she said, “I’d read that!” That line has a double meaning of course, and it’s meant to have a double meaning. People don’t just step into bad relationships, or most don’t. Bad relationships always start off well, sometimes very well and full of “spice,” as one friend calls it, and then they veer off into the terrible. That’s essentially what I’m doing. A woman gets into a relationship, it starts off well and then goes bad. The book is dark, violent, and peppered with horror. Not “The Exorcist” horror, but the kind of horror I usually like—creepy and unseen. Originally I set out to just do a straight up horror novel but as I was writing the first draft, I realized I wasn’t comfortable with classic horror. I decided to back off on that and make what horror I am using psychological, if that makes any sense.

And, although I haven’t done it much, or published what I have done, I do like to write about romantic relationships where someone is just gone, gone, gone over another person and it can’t go well. “Metalhead Marty in Love,” one of the stories in the collection, is a prime example of a guy who is just out of his head over a woman. “It’s Hard to Be a Saint in the City,” another story, is the same. I wrote them as tragic rock ballads, I suppose. (I do love my classic rock music.) But in my novel, I veer away from the unrequited love theme and dip into something more sinister. The guy is crazy about my main character. He’s just not capable of being good to her.

What other publishing plans do you have for 2016 and beyond?

I’m working on my novel so I don’t think I’ll be publishing too much more this year. Maybe a story or two. I do love short stories but in order for me to really make it the publishing world, I have to focus on longer projects. For a long time I’ve been focused on short stories and although I’ve tried longer projects, I’ve either abandoned them or found that I wasn’t satisfied. And I wasn’t satisfied because I didn’t have a handle on the longer form. I tend to beat myself up, brutally too, and I think for a couple of years, I gave up, telling myself that I might not be a novelist. Just a short story writer. But that’s not true. I’m just one of those people who take the long, winding, difficult, full-of-potholes back roads in life. Or, I’m just block-headed. I’m more at ease with the long form now. I got it. Finally.

This time, I’m going to finish this novel—it is almost finished, actually—and I’ll write more. Whether these novels get published is another story.