What: His debut, PAST CRIMES, has been nominated for the Edgar, the Anthony, and the Barry Awards for Best First Novel.  The second book in the Van Shaw series, HARD COLD WINTER, was published in March by William Morrow (US) and Faber & Faber (UK).  A native of Seattle, Glen now lives in California, but frequently returns to his hometown to soak up the rain.

Congratulations on PAST CRIMES getting an Anthony Award nomination for Best First Novel! Where were you when you got the news?

Thank you!  I was just starting work at the day job when the texts and tweets started coming in.  It’s a perk of having friends on the eastern side of the US: I get good news early in the morning.

Out of curiosity, have you read any of the other books nominated in your category? In your opinion, are there any similarities between any of the books in this category?

I haven’t yet.  For the Edgars, I read all of the other nominees.  I’d like to do the same for the Anthonys, but I have to balance that with the loudly-ticking clock of my next book deadline.  I might put their titles into a hat and read the first one or two I draw before September.  It’s a no-lose gamble; whatever comes out is certain to be good.  With deadlines last year, my time for reading went out the window, and discovering new authors was a horse on which I wanted to get back up, to completely tangle both grammar and metaphor.

Tell me about your protagonist, Van Shaw. Why did you make him an ex-Army Ranger?

I backed into the idea of Van being a veteran of our recent wars.  It wasn’t to make the character some sort of superhero.  He was raised in a criminal environment, and I wanted him to drastically break ties — more than just moving away — and make a new life for himself.  It seemed logical that a tough teenager with no resources might forge a path in the military.  While talking with a friend of mine who was in the Special Forces for a number of years, he summarized the rapid-response, light-infantry purpose of the Rangers as “knocking down doors and blowing shit up”. That sounded like a perfect fit for Van’s goals at age nineteen.

It proved to be a good choice for another reason.  Van was raised with a skewed moral compass.  The Ranger creed showed him an alternative.  He’s a guy who lived in both black and white, selfish and selfless, now trying to adjust to the grays.  If there’s a larger theme to the series, it’s probably that.

How much research did you put into creating his military background? Was the information you were looking for easy or hard to find?

While the books aren’t military thrillers, I wanted Van’s attitudes to match those of a senior NCO who has spent the better part of a decade at war.  Through friends, I met and interviewed veterans and active-duty personnel who were very generous with their time and input.  They fact-checked my drafts, and I give them full credit for all the cool stuff.

The research kicked up a couple of gears with the follow-up novel, which I’ll talk about below.

Reviews go back and forth between describing your writing as “mystery” and “thriller”. How much do you think about genre?

It’s a smorgasbord.  I like a whodunit.  I like action scenes.  I like the puzzle-box aspect of mysteries, dropping in clues that the reader may not realize are clues.  And I like just a touch of the heightened reality we see in a lot of thrillers.  Because I wanted to write all of those things, I got greedy.  I figured if I were unsuccessful, it wouldn’t be for lack of ambition.

How does Van Shaw evolve in the follow-up, HARD COLD WINTER? Did you find it harder to write the second book or the first book in the series?

Tough choice, but I’d have to say the second book.  Despite all the growing pains involved in the first one, the second was written on deadline.  And some of the topics were emotionally loaded, which I had to navigate while still delivering an action thriller. 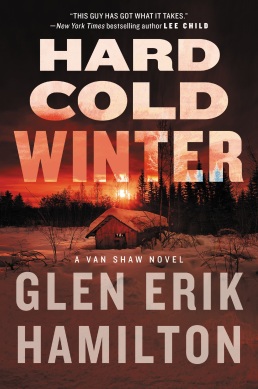 In HARD COLD WINTER, Van is out of the Army and adjusting to civilian life.  It’s not an easy transition.  Worse, the danger he finds reawakens old symptoms of PTSD.  His Army buddy Leo Pak is fighting his own demons.  Leo’s pain is more raw.   I wanted the two men to talk to each other about those experiences, as soldiers would.  I also wanted to be especially careful not to exploit the real and often overwhelming impact of PTSD on our veterans.

So in addition to a lot of reading on the subject, including David Finkel’s excellent THANK YOU FOR YOUR SERVICE, I talked to veterans and former Rangers about their own tours, how they thought about combat stress while active and since they’ve become civilians.  Some of those men were very open and honest about their issues and frustrations, and I owe them a great deal.

Do you have any future plans for Van Shaw that you care to share?

I’m banging hammer and anvil together on the third book now, and I’m excited about it.  It’s ruthless fun backing Van into corners, both moral and more tangible, and seeing how he tries to fight his way free.  He’s planning for a future he never expected to have.  And his extra-legal skills are a tempting path.

Who are some of your biggest influences as a writer? Are you able to see them clearly in your own work?

To dig way down to the foundation blocks, I’d say John D. MacDonald’s Travis McGee novels, and Robert B. Parker’s Spenser.  They were two early influences where I devoured every entry in the series as a teenager.  MacDonald’s social relevance and introspection, and Parker’s snappy dialogue and way with a fist fight.  If I get within swinging distance of those targets, I’m happy.

Until I buy some of the Anthony noms… I tore through BLOOD OATH by Christopher Farnsworth on the way to New York, and LITTLE GREEN by Walter Mosely on the way back.  I’m starting THE DAY SHE DIED by Catriona MacPherson.  It can be my reward system: write a page, read a page.  Just as long as I don’t suddenly imbue my Seattle characters with Scottish accents.