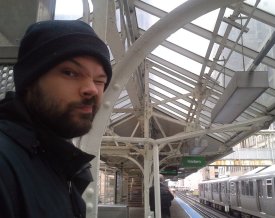 What: His short stories have appeared in Shotgun Honey, Thuglit, Crime Syndicate Magazine, Out of the Gutter, and various anthologies. He’s also one of the editors of Shotgun Honey. His short story collection, SOMEBODY’S TRYING TO KILL ME, was released in August.

Your excellent new collection, SOMEBODY’S TRYING TO KILL ME, includes seventeen noir tales. How did you select which pieces to include?

I listen to a lot of standup comedy: Patton Oswalt, Marc Maron, Maria Bamford, the sets that Robin Williams did in the ‘80s. All of those comedians alternate between quick jabs and longer setups, which allows them to build and maintain the energy of an hour-long set. When I started putting together this collection, I took some inspiration from that, and so you have the flash-fiction pieces lined up alongside the mid-length tales and the title novella. Hopefully that short-long-short rhythm allows the reader to catch a bit of a breather between the lengthier stories.

Beyond that, I knew I wanted to include the pieces that had been published in Thuglit, Crime Syndicate Magazine, and Reloaded (Shotgun Honey’s annual anthology). I’d also been working on the novella for years, off and on, and wanted it to finally see the light of day. Sprinkle all that with flash fiction from Shotgun Honey, and voilà: short-story collection.

The longest story in this collection is the novella, SOMEBODY’S TRYING TO KILL ME. Did that one start out as a short story that kept going? Or did you set out to write something longer?

In the first chapter of the novella, the narrator and his scary special-forces buddy have brunch in an overpriced Russian café, and the whole thing ends in bloodshed. I wrote that first, and sat on it for a year or two because I couldn’t figure out quite where I wanted the story to go after that point. Then I was flipping through some of my notebooks and discovered another story fragment about a model and her dissolute-writer boyfriend on the run. I thought it’d be fun to try to combine that fragment with the café-gunfight bit, and that became the core of the eventual novella.

If you live in New York City, you have a front-row seat to constant change. Vacant lots become multi-million dollar condos, seemingly overnight. Cool bars get bulldozed in order to make way for Whole Foods and Apple Stores. If culture is something built up over the course of years, all that gentrification is liable to make you think that the culture’s being leached out of the city a storefront at a time. I didn’t start out writing SOMEBODY’S TRYING TO KILL ME with the intent of trying to capture that sense of an era or a scene melting away, but when I went back to revise it, I found that emerged as a theme, and so I emphasized it in subsequent drafts, especially in the final confrontation along the waterfront. (Interesting side note: all the places in the story that have real-life equivalents, such as the Spike Hill bar in Brooklyn, have since been replaced by spinning gyms and whatnot—“progress” moves that fast here.) 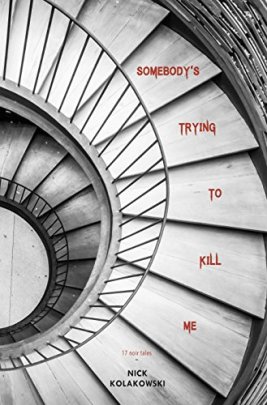 How did you get into writing short fiction? Any early influences you’d point to?

When I was ten years old, my dad gave me a paperback copy of Chandler’s TROUBLE IS MY BUSINESS. I read that book to tatters. From that moment on, I fell in love with noir, and particularly noir short stories. After that, I devoured pretty much every classic hardboiled short-story collection and novel I could get my hands on—stuff by Jim Thompson, Chester Himes, David Goodis, and so on. And when I decided to try my own hand at writing short stories, I learned two things very quickly: it’s easy to imitate that hardboiled style, and easy to do so badly. You really have to sweat to make it work, no matter how simple the prose seems.

One of my favorites in this collection is “A Bad Day in Boat Repo.” Do your story ideas come to you all at once? What was the inspiration for this one?

Nine years ago, due to a long and hilariously convoluted chain of random events, I found myself the managing editor of a newly launched cigar magazine. Never mind that I had never smoked a cigar in my life, and had no intention of taking up smoking as a habit. Whatever its downsides, the job had one interesting perk: I ended up bouncing from country to country in Central America and the Caribbean, hanging out in cigar factories alongside some interesting characters. In the end, the magazine failed, but I came out of the experience with a couple of notebooks’ worth of bits that could be converted fairly readily into fiction (and also some skill in bullshitting my way across borders, but that’s another story entirely).

So most of the elements in “A Bad Day in Boat Repo” came from real life: the jazz funeral in Nassau in the beginning, the mansion on the cliff, the kids in Havana using makeshift tools to fix 1950’s automobiles. Limonov and the punk in the suit are composites of a couple of people I knew. A story about a boat hijacker—although the narrator would never use that term to describe himself—allowed me to string those elements together in a way that felt organic.

The majority of my stories start out as fragments that I try to puzzle together into an interesting shape. Sometimes the result is ill-formed, and I have to abandon it, but sometimes it works.

Of the flash fiction included in this collection, I thought “The Day Jules Left Prison” and “Killing Clowns” really stood out. Does your approach to a short story change based on the length?

With flash fiction, I’m intensely concerned about the punch-line: what twist or final line will really sell it to the reader? It’s like writing a joke, between the buildup and release. Longer stories have some of the same mechanics, but the extra length affords you a little more texture and nuance, provided you keep some momentum going. I had to learn to write flash: it’s much harder to write something super-short that’s also effective, because with so few words, even small failures will implode the whole thing. 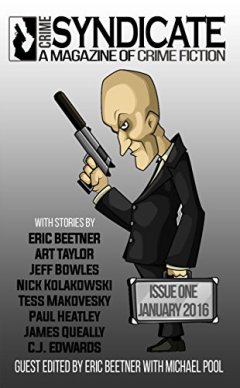 The noir community has seen some important short story magazines fold in the last couple of years (Thuglit, All Due Respect, Dark Corners, etc.). What role do you think the short story plays in genre fiction?

Short stories are vital to genre fiction, and they’re in serious danger at the moment. The problem is that nobody seems to want to pay to read anymore; they want it for free, now, or they’ll go somewhere else. The rise of online media propagated this issue by promoting a revenue system based on ads and eyeballs instead of subscriptions and pay-walls: we’ve fallen out of the habit of paying even a buck or two for something to read.

Short stories are the first casualties of that paradigm shift. Todd Robinson’s Thuglit was the gold standard when it came to modern pulp magazines—issue after issue after issue without a single dud tale in the mix—and he still found it hard to maintain as an enterprise, although he held on for years. Other magazines of similarly excellent quality also kicked the bucket. There are still publications going strong—Shotgun Honey keeps pumping away, and I’m really looking forward to what Richard Thomas’s Gamut will come up with—but the professional market is bleeding like a stuck pig.

And that bums me out. Pulp has its roots in newsstand magazines, in bite-size morsels of the titillating and macabre. If the short-story market bleeds out for good, we’ll have killed that connection to our tradition. But I’m also not sure how to fix it, aside from encouraging people to spend a few bucks a month buying up the magazines they love. Authors and editors got to eat. 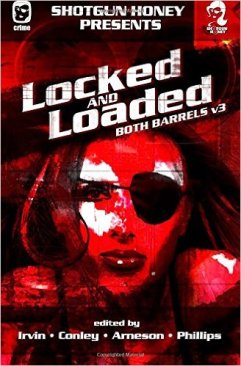 As a reader, where do you go to find great new short fiction? Who are some of your favorite short story writers publishing today?

I really dig Rob Hart. His flash fiction always nails the pacing and the grand finale—in particular I’m thinking of “Making It Easy,” which left me looking at apartment doors in a whole new light. I just finished reading Jen Conley’s CANNIBALS, and every story in that collection is a gem: she layers her stories with such melancholy, it’s like a rough fist grips your heart-strings and squeezes. I’m halfway through William Boyle’s DEATH DON’T HAVE NO MERCY, and his style is quintessential hard-boiled: stripped down but evocative.

I love them all. I’m also waiting for the short-story collection from Angel Luis Colon that’s supposedly due next year, because I like what he’s read at various Noir at the Bar gatherings in NYC.

In terms of finding new short fiction, being an editor at Shotgun Honey provides me with a nice stream of it. Out of the Gutter is the other, inevitable element in my reading rotation. Going to readings is also helpful—I buy more books than I should after seeing someone read their work.

Got any other publishing plans for the rest of 2016 and beyond?

A BRUTAL BUNCH OF HEARTBROKEN SAPS, a novella from One Eye Press, is coming out in March 2017. I’m also about to finish the first draft of a novel I like to describe as a hard-boiled combination of “The Most Dangerous Game” and a right-wing nightmare; I’m hoping that one might come out over the next year or so, provided I can fix all of the broken bones in the current text.