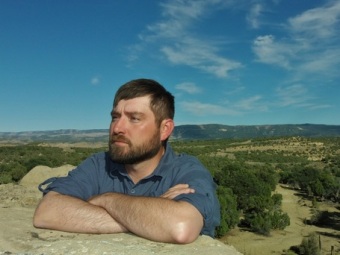 What: A former ranch hand, wilderness guide, dogsled musher, and hunter. He spent his childhood summers on his great-grandfather’s homestead or in a remote cabin in Colorado’s Flat Tops wilderness. He has earned a number of sharpshooter and marksman qualifications. NOTHING SHORT OF DYING is his first novel.

Your debut novel, NOTHING SHORT OF DYING, reads like a fast-paced gunfight. Can you tell me how the story came about?

“Fast-paced gunfight.” I like that. It’s an accurate description, I think. Well, it started with the location. I wanted to write about the area I live in. Not only because I love it, but because very few books are set in this part of the world. I also needed a tough character who could handle the rugged country. I wanted someone a little different, so I made sure that Clyde Barr wasn’t a super spy, or an ex-cop, or former Special Forces.

I gave him traits from some of my favorite books when I was young, ones by Jack London, H. Rider Haggard, and Conan Doyle. Once I had the location and the idea for Clyde, and I came up with some very bad characters for him to do battle with, the book kind of fell into place.

Your descriptions of scenery in NOTHING SHORT OF DYING are really vivid. How did you bring this to life?

I’ve spent most of my life outside, and I love sharing the beauty of nature with others. It’s the reason I guided, and something I try to put in my writing.

Clyde’s sense of loyalty to his sister, Jen, is very compelling. How did you develop the intricacies of that relationship?

Jen and Clyde’s story was written separately, and after I’d written the rest of the book. I think it’s important to show that Clyde is more than a brute, that he has a reason to help those in need, and that his promises mean something. We all are shaped by what happens during childhood, good or bad, and I wanted to make Clyde a real person. Broken, but human. Their story also propels the book because Clyde owes his sister, and wants desperately to call it even. This, along with how much he cares for his family, is the reason he’ll do anything to get her back.

I think it’s something we all wish we could do. Simply disappear, retire, and forget about the bad things that have happened in our lives. Unfortunately, it’s never that easy. Clyde is trying though, and there are plenty of places in the US for him to do so. America has fifty-six million acres of designated wilderness. These are areas where motorized vehicles, including bicycles, are prohibited. You have to walk in, or go on horseback. As long as you don’t camp in one spot for more than two weeks, and you make the occasional trip to town for supplies, you could potentially retire and live there.

There’s a character named Zeke who is the quintessential mountain man—gruff, violent and a bit off his rocker from isolation. What or who did you base this character on?

Zeke is an amalgamation of the people I’ve met or worked with who scared the shit out of me. I’ve known quite a few strange and dangerous people, and most of them lived in remote areas and were a bit twisted by the isolation. On one ranch where I worked, there was a man who drank vanilla and mouthwash, pulled straight razors and pistols during card games, and fried dollar bills. In Death Valley I worked with a man whose name, on his driver’s license, was Catman. No last name. He drank a fifth of whiskey every night, out of his locker, while he cooked for a four-star restaurant. Another strange one was a roommate of mine in worker’s housing on a seasonal job. He would occasionally wake and pull a pistol from under his pillow, wander the apartment in his boxers, waving his pistol and mumbling about the Laotian Mafia.

I saw the influence of Lois L’Amour and Cormac McCarthy in your book. Who would you consider among your influences?

REDEMPTION ROAD, by John Hart. I’ve been looking forward to reading this for a while. I’ve read all his others, and was blown away by his seemingly simple, beautiful prose. The man is a master craftsman, and storyteller extraordinaire.

Got any other publishing plans for the rest of 2016 and beyond?

I have another Clyde Barr book in the works, and this one has Clyde wandering onto the Ute Reservation in Northeast Utah. There, a small town has been overrun by a group of outlaw bikers, and there is talk of a terror threat. It was fun weaving these treads together.