What: A novelist and comic book writer, he is the author of the Miami crime novels featuring Pete Fernandez, SILENT CITY and DOWN THE DARKEST STREET from Polis Books. He has also written a number of comic books, including the best-selling and critically acclaimed ARCHIE MEETS KISS storyline, the “Occupy Riverdale” story, and the upcoming ARCHIE MEETS RAMONES.

The central character in your Miami crime series, Pete Fernandez, starts out as a down-on-his-luck newspaper editor. How did you choose journalism as the right profession for Pete?

Before I became a publicist I worked as a reporter and editor in Miami, so I knew and loved the world of the newsroom, and I really wanted to show that. So it made sense to have Pete start out as a newspaper guy, albeit one on his way out. Also, when I was thinking about what job would be conducive to becoming a PI, I liked the idea of Pete being an ex-reporter, so he’d still have that inquisitive nature, but it’d been subdued somehow, and he’d been relegated to a desk. That left him primed and waiting for something to come along and engage that part of his brain again, which had been addled by drinking too much. That’s pretty much where we meet him at the beginning of SILENT CITY.

The narrative in SILENT CITY has a hard-hitting, no-nonsense tone. Was this done on purpose to align with the journalism back story? How did you develop your style?

First off—thank you, that means a lot. I’m glad that came across. I can’t say I consciously set out to write it like a piece of journalism, but that’s my background as a writer—and even PR is all about clarity and concrete imagery. You won’t get far as a publicist if you’re just a hype machine. I think the end result was a byproduct of that and my influences, which include writers like Reed Farrel Coleman, who’s writing is stark (but extremely poetic) and people like Laura Lippman and Dennis Lehane, to name a few.

When I’m writing, I strive for clarity first, then look for opportunities to add flourishes for emphasis and color, which is a lot like writing a news or feature story—your main duty is to relay what happened or how something happened, then you can get fancy

The Miami in your books is not the glitzy one often depicted in television in movies. Why was this Miami the right location to set this series?

I was reading a lot of location-heavy detective fiction when I first moved to New York, and I was extremely homesick for Miami. I think those two tracks converged and I realized that I wanted to take a stab at writing a PI series myself,. I knew, off the bat, that I’d set it in Miami. But my Miami is very different from the one I was used to seeing on TV or movies. I think only a handful of writers—Vicki Hendricks and Charles Willeford come to mind—really showcase the native Miami, the jobs, suburbs, poor places. I wanted to try my hand at that, and use my own experience to create a Miami that was familiar to me. There’s some glitz and neon, but it’s a little dirtier and not as shiny as you’d find in other places, very much by design.

When you wrote the first installment of the Miami crime series, did you have any idea how many Pete Fernandez books you would write?

When I first wrote SILENT CITY, I thought it’d be three and out. I still firmly believe that—if your series features an evolving, changing character—you can only realistically go so far with it, unless you change the dynamic enough to keep it moving. Now, as I turn in my manuscript for the third book, DANGEROUS ENDS, my tune’s changed a bit. I have ideas for a fourth and fifth book and I feel like I’ve expanded Pete’s world enough that I could keep it going while still staying true to my original intent for the series—which was to show the evolution of this guy from complete washout to actual, productive member of society. Whether that means going to five or twenty books, I don’t know. I’m leaning toward the former but I’m no longer putting a hard stop on it. As long as the ideas keep rolling, I’ll be open to them.

How does Pete Fernandez evolve from the first book, SILENT CITY, to the second book, DOWN THE DARKEST STREET?

By the end of SILENT CITY, without spoiling anything, you’re left with a glimmer of hope that Pete is going to get his shit together. By page one of DOWN THE DARKEST STREET, you know that things have only gotten worse. I want to show that just because Pete is heroic, brave and smart that doesn’t mean he has sway over his demons. He’s fighting a battle on two fronts—the literal, criminal stuff that he’s stumbled into and the less concrete, but no less deadly, fight with alcoholism and addiction. So, just because he’s caught the bad guy doesn’t mean he’s got his life in order. That’d a struggle and story that continues to unfold for him into the third book. Hopefully readers root for Pete, despite his mistakes—which I feel are pretty human and understandable.

You also write for Archie comics. Which came first for you, comics or crime fiction?

They both seemed to happen around the same time, though I think my first comic—an Archie double digest—was picked up when I was four or five. But I also remember reading Puzo’s THE GODFATHER at a very young age, so that left a mark, too, and really tuned me into pulp and crime fiction. But as a kid I was obsessed with comics—first Archie, then superhero stuff like Batman and Spider-Man and the X-Men.

Eventually, I drifted from comics and got into journalism, but in college I discovered Vertigo books and indie comics which got me jazzed about the medium again. Then I had the crazy idea of merging my passions—comics, and my career in journalism—and that lead to me working at places like WIZARD MAGAZINE and freelancing for other comic book news sites. After that, it wasn’t a huge leap to decide to take my journalism skills and sell my soul to the PR gods, so I ended up working for DC Comics as a publicity guy. The actual writing of comics was something I’d always wanted to do, and it kicked into high gear when I got to Archie as a publicist, and they invited me to pitch on stuff. I’ve kept bugging them since!

ARCHIE MEETS KISS pretty accurately sums up my childhood. How did this one come about? What’s your favorite KISS song of all time?

Oh, I don’t know if I can pick one. I realize that’s a cop-out. The story of ARCHIE MEETS KISS is pretty linear—our CEO Jon Goldwater mentioned that Gene Simmons was interested in doing an ARCHIE MEETS KISS comic and I threw my hat in the ring as writer. I’d already done a few one-off stories for Archie. Surprisingly. they said yes and paired me with the great artist Dan Parent, who’s one of the best Archie artists ever. I put a pitch together, the KISS camp approved, and here we are. I even got to sign with Gene and Paul a few times, which was amazing and surreal—definitely a “This is my life?” moment. 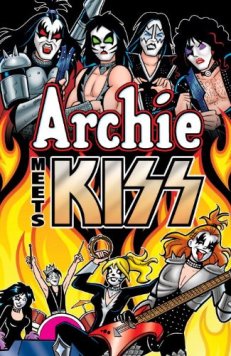 You weave a lot of music into your crime writing. In your opinion, what is the connection between rock and roll and crime fiction?

At least when it comes to the music and fiction I like—both are about outcasts, people who feel left out or who have to overcome challenges to do what they love. There’s an urgency and passion to great music—punk, rock, hip hop or whatever —that is less about craft and precision and more about feeling. That’s the music that speaks to me. It’s also what speaks to me about crime fiction. We all get hung up on genre and putting things in the right box so everything is neat and organized, but for my money, no books speak more clearly to the human condition than crime fiction.

I had the pleasure of meeting one of my literary heroes, George Pelecanos, on the day SILENT CITY first came out in 2013. I was riding high and I felt really live, and I got to tell him how much the Nick Stefanos books meant to me as a young, aspiring writer. Those books read like a great Replacements album—defiant, shambling, messy but possessing an energy and spirit you don’t see very often. Same for Lehane’s early Pat and Angie books—maybe a bit of your drink spilled on the way down the bar, but that’s part of the journey.

Thanks to crime fiction, I’ve walked down through poorest areas of DC, toured the Swedish countryside, wandered around Edinburgh and the dark corners of Los Angeles, and I’ve learned a lot about the world and the people in it. So, to me, both are one big stream of information and feeling, and I don’t think I could write crime fiction that didn’t involve music in some way, because both tell stories that really energize me and get me thinking about the world around me and outside my door. It’s a really primal response, I guess, but hard to ignore for me.

Got any other publishing plans for the rest of 2016?

Well, ARCHIE MEETS RAMONES is hitting next month from Archie Comics, and I have a story in a Replacements anthology, WAITING TO BE FORGOTTEN, that Jay Stringer put together with Gutter Books. After that, the third Pete book, DANGEROUS ENDS, hits in April, following the paperback release of DOWN THE DARKEST STREET. There’s some other stuff percolating, but that’s the big stuff I can talk about! Thanks for having me.