What: Christa Faust is a crime writer, pervert and pulp enthusiast whose novels include MONEY SHOT, CHOKE HOLD and HOODTOWN. PEEPLAND is her first comic series.

Born under a bad sign, Gary Phillips must keep writing to forestall his appointment at the crossroads. He was editor of the bestselling anthology ORANGE COUNTY NOIR, and co-editor of the groundbreaking BLACK PULP. Dropping the end of October from DC Comics will be his street level superhero miniseries VIGILANTE: SOUTHLAND, and his collection of short stories, TREACHEROUS: GRIFTERS, RUFFIANS AND KILLERS, is also out now from Down & Out Books.

Let’s start with the obvious question: How did two established West Coast-based crime authors get involved with this neo-noir comic series?

CF: Though I’ve lived in LA for more than 20 years now and love my adopted city, I still consider myself an East Coast ex-pat. I’ll always be a New Yorker at heart. Anyway, I’ve been writing for Hard Case Crime boss Charles Ardai since 2008 and have published two novels with his crime fiction imprint. He’s one of the best editors I’ve ever worked with and so when he told me he was starting a comic line, I jumped at the chance. I had this idea kicking around in my head for several years, something set in the peep booths where I worked in the late 80s. I knew that story really needed to be told through a visual medium and had considered pitching it as a TV series, but in the end somebody way more talented than me beat me to the punch with a similar concept. When this opportunity came up with Hard Case Comics, it seemed like some kind of crazy hardboiled destiny.

But I’d never written a comic script before and felt like I needed an experienced tag team partner. I knew Gary had written comics and was old enough to remember those bad old days as well as I did. Plus he’s dealt with some similar themes in his own work and seemed like a perfect match for this project. He’s the wily veteran to my mouthy rookie and together I think we came up with something more than the sum of our parts.

GP: I’ve talked about this elsewhere, but for me, I’d once visited New York back then as a teenager. Like a lot of folks my impression of the city was from films like “The Pope of Greenwich Village,” “Ms. 45,” “China Girl,” and “Alphabet City.” Films I’d see at the Tower Theater in downtown L.A., three in a row—be in there from early to late afternoon. Steeped in that kind of filmic lore, I had to jump at the opportunity to work with Christa to tell this crime tale of late ‘80s Times Square and its characters. 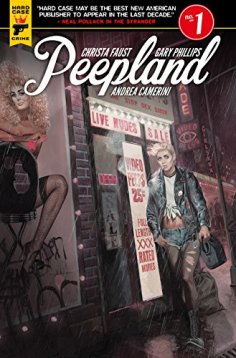 What is the personal connection to this 1980s New York landscape for you?

It will probably come as no surprise that I loved the punk rock undercurrent in PEEPLAND. Why was music a necessary driving force for these stories?

GP: How crazy that this question comes in the wake of Bob Dylan winning the Nobel for his songwriting, yeah? That music is such a signifier of the times…Leadbelly’s Bourgeois Blues, Billie Holiday singing “Strange Fruit” (and Nina Simone’s version as rebellious slave Nat Turner flees for his life in the new “The Birth of a Nation” film) to Beyoncé’s funkafied Super Bowl halftime tribute to Black Lives Matter and the Black Panthers that gets the right wingers panties in a bunch. Several years ago I worked on a project where a novella would be sold with its own hip-hop soundtrack. Didn’t take off, but what a concept.

CF: Growing up, I was deeply uncool and never really fit in with any one music scene. But there’s something about that nihilistic, they’re-gonna-drop-the-bomb-any-day-now-so-fuck-it attitude of Regan-era punk that appealed to the pissed off tomboy I was back then and ultimately influenced the tone of PEEPLAND for me. The character of Nick is a conglomerate of several different people I knew back then who were more deeply plugged in to the New York Hardcore scene than I ever was. I listened to a lot of Bad Brains (D.C. I know, but close enough) during the writing process and even named an issue after one of their tunes. In a way, their defiantly unclassifiable, hard-funk-fusion sound makes them the perfect soundtrack for PEEPLAND.

How is your approach to writing a comic series similar or different then writing crime novels? Does one feed the other?

GP: It’s similar in that you plot out the major beats in the story. But a comics script is a distinct form. In a film or TV script, you generally don’t describe the visuals as that’s the art director’s job. But in comics you are sort of the art director and writer as you have to communicate clearly to the artist what’s the frozen action in each panel—1980s New York, what’s in the foreground and background. That the whole of this assembly line process is telling the story to the reader.

CF: This was where Gary really took the wheel in our collaborative process, and working with him was a like master class for this comic newbie. Translating the live action story in my head into these frozen individual panels was a real challenge and watching the natural ease with which Gary is able to create an organic visual flow between the story beats taught me so much. He basically tossed me in the deep end and then dared me to keep up.

What do comics do for you as a writer that novels can’t?

GP: I’ve been a comic book fan since I was a kid, this bastard form of pop culture, marrying words and images in the funny pages. I was weaned on the images of Jack Kirby, Gil Kane, Steve Ditko and John Buscema. I became a writer because I can’t draw. But back before them internets, back in the stone age of what was called fandom where comic book wannabes produced their own strips in mimeographed and sometimes offset magazines, I worked hard to write and draw my own characters. Even to this day, all those years down the line, I still can’t wait to pick up my trove of comics or graphic novels form the comics shop. A geek forever I guess.

CF: As I mentioned before, I really wanted a visual medium for this particular story. I didn’t just want to tell readers what it was like back then, I wanted to show them. Comics gave me the perfect medium to do exactly that.

I loved the artwork created by Andrea Camerini. Tell me about the process of working with an artist to bring your stories to life on the page.

GP: The challenges are what’s in your head and how do you get that across to the artist? It helps that Google allows you to call up photo references and pass those along. Still, at times, it’s a back and forth process as the artist has their own filter, their own way of interpreting the visuals they want to put on the page. The benefit is invariably the finished product. The kick you get as you take in each page. Like a narcotic for me.

CF: The hardest part for me was letting go of my natural control freak nature and trying not to be too much of a helicopter mom. I had to find a balance between obsessing over every single detail and letting the artist bring their own style and POV to the project. One of the reasons I chose Andrea was because of his gritty, realistic street scenes. 80s Times Square was as much a character in this story as any of the humans and I wanted her to look just like I remembered. I wasn’t willing to accept a stylized noirish “Anycity,” I wanted the art to feel authentic, to reflect the real world of that time. Andrea delivered.

How many comics do you have planned for the PEEPLAND series?

GP: We wanted six issues but got five. We’re happy.

CF: Yeah, and that was an interesting challenge, trying to fit six issues worth of plot into five. It really made us cut deep down to the bone and left us with a super lean, fast-moving story. But yeah, I couldn’t be happier or more proud of the final result.

What other publishing plans do each of you have for the rest of 2016 and beyond?

GP: Working on a graphic novel that wouldn’t be a miniseries, but told all under one cover, with characters inspired by real life black comics pioneers from the 1950s including Jackie Ormes, the first black woman cartoonist to have a syndicated strip, Torchy Brown.

CF: I’m fighting to finish the third and final Angel Dare novel. It’s called THE GET OFF and is set in the world of rodeo bullfighters. It’s been a hell of a ride and probably the hardest book I’ve ever written. After that, who knows…

S.W. Lauden’s debut novel, BAD CITIZEN CORPORATION, is available from Rare Bird Books. The second Greg Salem novel, GRIZZLY SEASON, will be published on October 11, 2016. His standalone novella, CROSSWISE, is available from Down & Out Books.