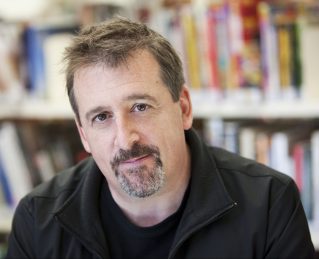 What: A crime writer, freelance journalist and pulp fiction scholar. His first novel, GHOST MONEY, a crime story set in mid-nineties Cambodia, appeared in 2012. His second novel, GUNSHINE STATE, was published by 280 Steps in September. His short fiction has appeared in a number of print and online publications, including Beat to a Pulp Hardboiled 3, Shotgun Honey Presents: Both Barrels, Phnom Penh Noir and the 2016 anthology of Australian crime fiction, Crime Scenes : Stories.

GUNSHINE STATE was one hell of a read! Tell us a little about how this book came together.

Thanks. GUNSHINE STATE is the fusion of two literary ambitions.

Firstly, I love a good heist story but not a lot of them have appeared on the local crime fiction scene. I’ve always wanted to try my hand at writing what I hope is a quintessentially Australian take on the heist genre and GUNSHINE STATE is it.

Second, there was a period in my life several years ago when, for various family reasons, I was spending a lot of time in Surfers Paradise, a city in the sub-tropical south of the Australian state of Queensland, where a decent chunk of GUNSHINE STATE is set. For US readers, Surfers is a very strange place. It was a small settlement hacked out of mangroves swamps in the forties that by the sixties had become Australia’s foremost beach holiday destination. It was modelled on similar places in Florida, so it has this weird faux Miami vibe, traces of which are still visible. Nowadays, the local authorities promote Surfers as a family friendly destination, but it has a very shady history.

From the sixties to the mid-eighties, Queensland was run by a group of corrupt cops known as the ‘Rat Pack’, who were involved in everything from prostitution, drug trafficking and illegal gambling, to political intimidation and murder. Surprisingly, only a handful of Australian crime novels have touched on the darker aspects of Queensland’s history, and spending time there, I decided I wanted to add to that list. 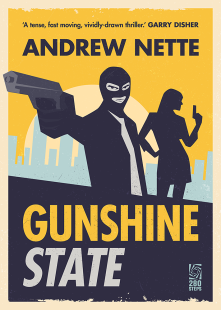 Your writing style is lean and mean, throwing the reader right into the action. Is this something that you consciously strive for, or just the way the words come out of your head?

Oh, Christ. I wish the words could just come out of my head so easily. No, the ‘lean and mean’ style you refer to is the product of considerable work. This includes ruthless editing and being prepared to mercilessly cut any aspect of the story that does not move the plot forward. My style is probably also the result of some of the main literary influences in this book; Don Westlake (aka Richard Stark’s) Parker books are the most obvious of these. I am a big fan of the Crissa Stone books by Wallace Stroby, and Garry Disher’s Wyatt series. In many respects, I was deliberately trying to do a darker version of the Wyatt books, which are already fairly hardboiled. These three authors all have a lean/less-is-more style, which I greatly admire.

The title of this book is very memorable. Did you have the title in mind when you sat down to write? How important are book titles to you as a reader or reviewer?

The title GUNSHINE STATE came from the headline of newspaper report into the increased availability of guns in Surfers Paradise, I found while I was doing research for the novel. The moment I saw it a light bulb went off in my head and I thought, ‘Hell, yes, that’s the title’. If only all titles came that easily.

A good title is pretty important, yes. The reaction to the title has been incredibly positive. So much so, I’ve been worried the actual story itself wouldn’t match up to it. 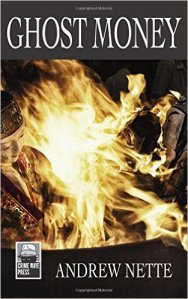 How about covers? 280 Steps has a distinctive style, but did you contribute to the look and feel of GUNSHINE STATE’s cover?

280 Steps sent me the proposed cover design and asked what I thought. I’d had absolutely no input prior to that. I loved it from the get go. Not only does it nail the feel of the book, it’s got a similar vibe to the artwork the late Darwyn Cooke did for the Parker series of comics and there’s nothing wrong with that.

Non-casino poker games play a key role in GUNSHINE STATE. What drew you to use this as a plot device? What kind of research did you do?

I have a friend whose previous life included a stint as a journalist on a poker magazine. He introduced me to the world of the illegal non-casino poker game, as he had a lot of experience of them while he was working on the magazine. He was able to provide me with details about what they were like, the atmosphere at them, etc.

What are some of your favorite heist novels of all time? How about films?

I’ve already name checked some authors who do a good heist novel: Gary Disher, Wallace Stroby and Don Westlake. I recently read the W R Burnett novel on which John Huston’s 1950 film noir The Asphalt Jungle is based. It was terrific, much more layered than the film and dark as anything. I recommend it.

My favourite heist film is The Friends of Eddie Coyle (1973). Robert Mitchum is fantastic as Eddie ‘Fingers’ Coyle, a 51 year-old ex-con, gun runner and Christ knows what else in his criminal career, facing the prospect of a three to five-year jail stretch for being caught driving a truckload of stolen whisky. Coyle will do anything to stay out prison, but all he’s got to trade is information, in particular, information on the identity of the gang that has been pulling off a series of audacious bank robberies. Supporting Mitchum is a top-notch cast of character actors, including Stephen Keats, Richard Jordan and Peter Boyle. The story, look, the dialogue, every aspect of the film works superbly.

There are a heap of other heist films I love, including Across 110th Street (1972), Paul Schrader’s Blue Collar (1978), Peter Yates’ excellent 1967 British heist film, Robbery, and the list goes on. If readers are interested, they can check out some of the posts I have done on my site about the best heist films here and here.

You are currently “undertaking a PhD examining the history of pulp paperback publishing in Australia.” What can you tell a newcomer about that genre?

That’s a huge question. The main thing to stress is that pulp fiction was not just something that happened in the US. Australia had a major pulp paperback publishing industry after World War II and it continued until the early 1980s. As is the case with all pulp, regardless of where it was from, most of it was terrible, but there are some real gems to be found amid the dross. Probably the best thing to do, if readers are interested in finding out more, is to check out my website. This contains a lot of my writing on Australian pulp fiction, as well as images of heaps of the covers. 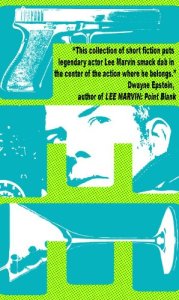 What has being a reviewer, editor and publisher taught you about your own writing?

The most important thing reviewing has taught me is how much good crime fiction there is out there and how good you have to be to cut any ice.

That said, I don’t feel I read nearly as much as I would like to or should, and that I write about the books I do read even less. Writing and reviewing is something I am always fighting to find the time to do because as an author, I believe it is really important to give back to the crime fiction community, if I can use such a broad term. A pet hate of mine is writers who only ever use their websites or social media to tout their own work, and never review or plug other books and authors. Writers, particularly early and mid-career authors, are all in this together and we should try to support each other to whatever degree we can.

In terms of my role as one of the editors and publishers of Crime Factory Publications, the take home lesson is how hard and time-consuming it is being a publisher.

What other publishing plans do you have for the rest of 2016 and beyond?

I am only in the first year of my PhD study I am keen to make as big a dent in the project by this end of the year as possible. I am also co-editor of a non-fiction book on how youth subcultures have been portrayed in pulp fiction, 1950-1980. That’s due out in the second half of 2017 and everything to do with the book has to be with the publisher by the end of the year. As if that wasn’t enough, I’m also working on a monograph on the 1975 dystopian SF classic, Rollerball. The book will also look at other films in what I am calling the ‘the death sport’ cycle of cinema, Running Man (1987), Death Race 2000 (1975). It is a different kind of writing, which is why I was interested to do it, a million miles away from fiction, but, for the same reason, a huge challenge.

In a couple of years’ time…Finishing my PhD and more books, non-fiction and fiction, including a sequel to GUNSHINE STATE. I have the plot. I just need to find the time to write it.