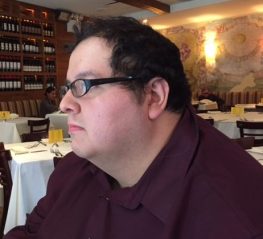 What: He was born in Mexico City and moved to the United States, his time living on the border left an impression on him, and much of his writing revolves around that area and its people. In his free time he enjoys watching wrestling and satisfying a crippling Lego addiction. HARDWAY is his debut novella.

Congrats on the release of HARDWAY. What’s the story behind this story?

I had the basic concept—kids steal a wrestler’s championship belt and things escalate—banging around my head for a while, with the first draft being a 5k piece for a crime writing contest. By the time I finished it, I found myself having more to say, and that was right around the time that Shotgun Honey opened up for submissions, so I decided to go back to the story and see what I could produce without a word count restriction. 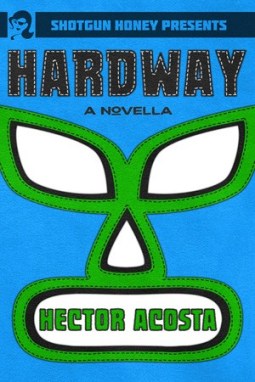 Why was backyard wrestling the right back drop for HARDWAY?

As anyone who knows me, follows me on social media, or interacts with me for more than five minutes will tell you, I love wrestling. Much like the main character of the book, Spencer, I grew up watching the local wrestling show with my family, and even though my interest in the sport (and yes, it’s a sport damn it) has fluctuated throughout the years, I’ve never left it far behind.

With HARDWAY, I wanted to touch on the weird time in a kid’s life where you’re supposed to be too old for watching wrestling, but still too young to really understand why. I wanted to show wrestling through the perspective of kids too passionate to know hitting each other with light bulbs and jumping off ladders might not be the safest way to show your love for something.

The story revolves around two brothers growing apart. Was this inspired by anything in your own life?

Spencer’s relationship with his older brother, Billy, is somewhat inspired by my own relationship with my brother. We’re identical twins, and growing up, one of the things we both heard was how close were supposed to be because we looked alike. And while we had an okay relationship (which has improved as we both got older), we were never ‘sense what the other is thinking’ close. I think I always felt a bit guilty about that, and HARDWAY helped me get a sense of why that was, as well as describe the sense of loneliness of having someone constantly around you that you don’t really understand.

HARDWAY was published by Shotgun Honey/Down & Out Books, best known for hardboiled crime fiction. How would you classify your novella? Does genre matter to you?

I originally envisioned HARDWAY as a more straight forward and darker crime story. As the story got underway, however, I found myself leaning in other directions, until I ended up with something I’ve taken to describing as a coming of age crime novella.

I think sometimes the idea of genres and where our writing fits in is viewed negatively—as something writers are hamstrung with or pigeonholed into—but recognizing certain genre conventions can also help a writer steer a story. Midway through the writing process, I figured out HARDWAY wasn’t going to be the hardboiled story I set out to write, and while I could have adjusted both plot and characters to better fit that specific genre, I also realized it would be a poor fit. I think the story is stronger for it. 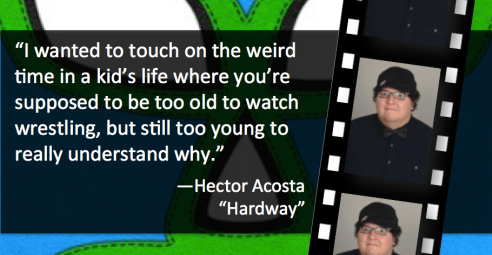 Speaking of genre, HARDWAY could also be classified as a YA. Do you have any favorite YA authors/books?

Man, YA and genre could be a whole discussion in itself couldn’t it? I find that out of all genres, that one seems to be the most fluid. Despite writing what at the very least has the DNA of a YA book, I wouldn’t call myself a big reader of the genre. But then I think of The Harry Potter series,THE OUTSIDERS, BRIDGE OF THERABITHIA, HUNGER GAMES, and THE GOLDEN COMPASS series—all books I’ve read, loved, and that have stuck with me.

Who are your favorite crime authors? What are you reading right now?

Let’s go with the good old standbys first, because yes, everyone rattles them off, but there’s a reason why: James Ellroy, Elmore Leonard, Dashell Hammet, and Raymond Chandler. Chandler’s LONG GOODBYE is the one I return to time and time again.

I’ve been on a P.I kick lately (there’s that whole genre thing again). Currently reading Joe Ide’s IQ, which I’m really digging. Also recently finished Ben H. Winter’s UNDERGROUND AIRLINES which I’m still thinking about, it’s that good (also check out his Last Policeman series if you haven’t). I got the chance to read Alex Segura’s latest Pete Fernandez book DANGEROUS ENDS, and his take on Miami and the alcoholic detective really work for me. I also can’t say good enough things about Lou Berney’s THE LONG AND FARAWAY GONE.  I also just picked up Shaun Harris’ THE HEMINGWAY THIEF, and while only a few pages in can tell I’m going to enjoy it.

We met at Murder & Mayhem in Chicago. Was that your first conference since publishing HARDWAY?

Not only was it my first conference since being published, but my first conference ever. It was a wonderful, overwhelming, instructive, and draining experience, not necessarily in that order. I’m an introvert by nature, so being around and talking to so many people is not something that comes naturally to me. Thankfully everyone was friendly and helpful. It’s quite the experience to go from talking shop to discussing the sexual acts of mice.

And the conference itself was great! The people running it had a good mix of panels filled with a variety of writers and people in the business, assuring that you would find a panel that struck your interest. At the end of the weekend, I left having met a bunch of people who I’d previously interacted with on Twitter, met a bunch of new folks I’m now interacting with on Twitter, and was newly inspired to keep plugging away at my writing. Can’t ask for more.

Oh! I also hugged awesome-person, Dan Malmon, which was totally worth the price of admission in itself.

What other publishing plans do you have for the rest of 2017 and beyond?

I just finished up my first stab at a cosmic horror story. It stemmed from my own fear that I was becoming too comfortable with what I was writing, and decided to stretch out into something I never wrote before. I’m planning to self-publish it closer to the fall.

In June I’m part of an anthology in which a bunch of talented writers are tasked with killing a really nice guy. It gives me a chance to write something which started off as a joke on Twitter—Condiment Noir.

Finally, I’m working on a PI novel set between the border of Juarez and El Paso which I hope to have finished before the end of the year. The main character has shown up in each of the Shotgun Honey Anthologies, and is one that I’m really excited to sink back into.

S.W. Lauden is the author of the Greg Salem punk rock P.I. series including BAD CITIZEN CORPORATION and GRIZZLY SEASON (Rare Bird Books). His Tommy & Shayna Crime Caper novellas include CROSSWISE and CROSSED BONES (Down & Out Books). He is also the co-host of the Writer Types podcast. Steve lives in Los Angeles.