What: The author of THE MOTEL WHORE & OTHER STORIES, GUNS, DRUGS, AND DOGS, AN EYE FOR AN EYE, and FATBOY, as well as almost fifty short stories published online and in print at the likes of Thuglit, Spelk, Flash Fiction Offensive, Shotgun Honey, Horror Sleaze Trash, and Crime Factory.

I just read FATBOY and thought it was great. Where did the idea for this dark tale come from?

Thank you! FATBOY stop-started a few times as a short story, but I either couldn’t settle on what it was supposed to be about, or else it kept growing beyond the confines of being a short story. The earliest iteration had the main character and his girlfriend working together to take down his boss at the garage where he worked in order to provide medical care for their son. I thought this sounded a bit too Breaking Bad, though. I read soon after starting of a serial killer called David Parker Ray who had created a torture chamber inside his trailer home. I thought to myself, okay, they’ll do something similar, they’ll create this room inside their home where they can hold the boss to ransom, prove to him they’re not fucking around. Ideas kept coming, things were spiralling. Eventually I just sat myself down, decided it wasn’t going to work as a short story, and wrote the first draft of what would eventually become FATBOY late at night over the course of a fortnight while listening to Ministry’s In Case You Didn’t Feel Like Showing Up. Elements from each round of attempts at making it a short made their way into the end product—the girlfriend and young son, the trailer park etc.—so they weren’t completely wasted efforts.

The book starts with a bartender, Joey Hidalgo, on a several day bender. Why set this story in bars? Have you worked in bars yourself?

I’ve done minimal bar work, and I wasn’t very good at it! I don’t drink, never really have, so even the simple things like which drink goes in which glass were lost on me. Still, I think there’s a lot of life in bars, a lot of character, particularly dive bars. Maybe not the kind of life you want to live yourself, or characters you want to know, but it’s there. Brian Azzarello, writer of 100 Bullets, once said he would go to bars and just listen to the people there talk, for both inspiration and to shape the crafting of his own dialogue.

Having Joey in bars, on a bender, it was a way of showing his self-destructive personality. I think from the off you know that this guy, while he may have good intentions, is not afraid to do some bad things. 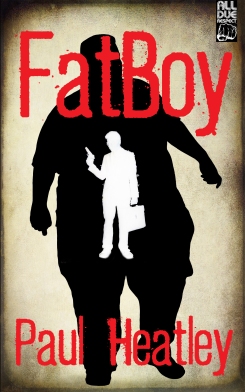 Hidalgo’s anger issues and twisted sense of right and wrong drive him to make some desperate decisions. In your mind is he a hero or a villain? Or something in between?

Definitely in between. An anti-hero. He’s trying to do the right thing, as skewed as his perception of what that is may be, but he’s doing it in the worst way imaginable. He’ll use people, hurt people, do whatever he has to do to anyone that gets in the way of what he wants. And plus, anti-heroes are far more interesting as characters. They’re real. Everyone’s an anti-hero, everyone believes they’re the hero of their own life. In David Nemeth’s review of Michal Connelly’s latest book, he said it was hard to read about such heroic, clean cops, that it lacked believability, so soon after reading Don Winslow’s THE FORCE, which is populated with anti-heroes.

I particularly liked the dialogue in FATBOY.

The dialogue has been well-received, and I’m very pleased about that. I’m not American, this is an Englishman attempting to write the dialogue he loves reading and hearing in American books, movies, TV, sometimes songs.

When I came to read the first draft of FATBOY, I was appalled. I hung my head. I was ready to give up on it, but I thought there was one saving grace to it. The speech. I took a George V. Higgins approach to the rewrite. I let the characters tell the story. The first draft suffered from too much exposition. I’m pleased with how it eventually came out, I think the right balance is achieved, and I’m extremely gratified with how the dialogue has been received by its American readers.

How does the writing in FATBOY differ from your previous books like THE MOTEL WHORE, THE VAMPIRE, and THE BOY? How has your writing evolved?

When I started out writing, I had a concern that my content was perhaps too dark. THE MOTEL WHORE, THE VAMPIRE, and THE BOY were mostly attempts to exercise some of that darkness, to just get these stories down on the page and out into the world where people could make their own judgment, which is why I chose to self-publish them. I mean, I’ve since come to realize I’m not too dark. There are much darker writers than me.

FATBOY is probably a little lighter than those earlier works. I’m not afraid to try to insert a little humour into my work now, though I think that really began with AN EYE FOR AN EYE, which was published by Near To The Knuckle just under a year before FATBOY came out.

As for the evolution of my writing, I’d like to think I’m getting better. I write every day, so hopefully with each word, each work I edit, each publication, I’m learning and growing and getting better. It’s one of those motivational sayings that kind of gets thrown round so much it’s becoming almost a cliché, but I didn’t come this far to only come this far.

You’ve also published a lot of short stories. As a writer, what appeals to you about the shorter form?

Some stories just work better short. However a story needs told, it needs to be told within the right amount of words. If it’s stretched out too long, if it’s cut too short, it always shows, and it’s damaging.

The writing of short stories is important for learning, I feel. It’s like an apprenticeship. It’s how you find your voice as a writer, and how readers find you, and make a decision on whether or not they want to read anything more by you. I learned a lot about writing in the crafting of a short story. The importance of editing rang through. The first three short stories I had published, at least two of them were flukes. I got lucky. They were poorly edited by myself, and it showed in that it was a few years before the publication of my fourth, which was also my first crime story. Red Eyed Richard saw the light in issue three of Thuglit. Todd Robinson seemed like a scary guy, I didn’t wanna send him any sloppy shit. I must’ve read that story at least ten times before I sent it out. It was accepted, and then it clicked for me: read your work, read it again, read it until it’s right. I’ve been doing that ever since, and I’ve been successful enough with it that I’ll keep doing it.

Do you read a lot of short stories as well?

Yes. Most of, if not all, my writer friends on Facebook I’ve made sure to read at least one of their short stories. I have a lot of collections on the go, too, and have done for many years now, dipping in and out of them here and there—Raymond Carver, Chekhov, Amy Hempel, Mary Gaitskill, George RR Martin, James Ellroy, Philip K Dick, Sylvia Plath, Gary Duncan, probably a couple it’s been so long I’ve forgotten them.

I’ve got a list longer than my arm of things I need to do, projects I either need to plan, write, or edit. Hopefully they too will see the light of day. FATBOY had something like a three or four-year gestation. Fingers crossed future titles won’t take so long! On the short story front I’ll be in the next issue of Crime Syndicate, and I’m part of the Flash Fiction Offensive’s Gutteral Screams in October.