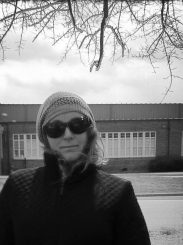 What: Her short stories and flash can be found in Thrills, Kills and Chaos, Flash Fiction Offensive, Yellow Mama, Hardboiled Wonderland and Revolt Daily. Her stories have been in anthologies available through Static Movement Publishing, Out of the Gutter, and Horrified Press. She is rotating host for Noir on the Radio, Dames in the Dark. Her first book, ROUTE 12, was released February of 2016. Her latest book, MAY, was released on January 8 with Down and Out Books.

Congrats on the release of your new novella, MAY. How did the story in this one come about?

After ROUTE 12 came out Sandra Ruttan and I began communicating quite a bit. She helped me focus my writing process and outline the steps needed to, hopefully, continue to get published. She would send me publishers and zines that she thought worked for my style. When Down and Out opened their submission window she encouraged me to submit.

The character of May had been cooking for some time and I found my chance to shine her up and send her out into the world.

The writing in MAY follows in the same dark vein as ROUTE 12. How did heartbreak and tragedy become your calling cards?

No idea. I didn’t know that my writing was so dark, to be honest. That’s funny and it makes me very happy. Now I want to print business cards that actually say that, but who uses business cards?

Crazy thing, I actually hold back a lot of what runs through my head. Shivers. That can’t be good.

I’ve seen your writing compared to Flannery O’Connor. Who are some of your main influences?

That Rob Pierce. He’s awfully good to me.

As a long-time, card-carrying member of any and all misfit clubs, I read a ton of Stephen King when I was younger. I had a real affinity for the meek inheriting the earth and messing some stuff up in the process. Pssst. Still do.

See, after the undeniably cathartic gore and horror, often, Stephen King lets the battered and the bullied win. They stand against nightmares, human and otherwise, and get in at least one good kick to the groin. Or set things on fire with their mind.

When I moved out on my own, places like D.C. and L.A., I started to read more crime fiction. Seems a natural progression. James Ellroy. Jim Thompson. Thomas Harris.

Joe Lansdale is a perfect combination of horror and crime. THE THICKET. EDGE OF DARK WATER. BUBBA HO-TEP. Hand’s down, he is one of the greatest American storytellers.

And still, I pull out Shirley Jackson, Kate Chopin and Flannery O’Connor. Manga is a new interest. I have a very long list of favorites.

There’s a strong sense of place in MAY. Why did you choose set it on along the North Carolina Coast?

Folly and Harbinger are fictional, but inspired by coastal towns and islands along the Southern and Mid-Atlantic. These areas are gorgeous and wild. Fat with history, drama and tragedy. There is a sense of vulnerability, too. They all but dangle at the edge of the Atlantic, small and alone. Alienated and forgotten. I think there are times when we all feel like we’re at the end of the world waiting to be washed away.

Of course, places like Folly or Harbinger can attract a deep and varied boat-load of crazies, as well. 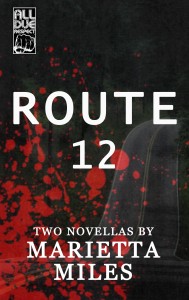 You and I have had funny exchanges about music on social media. Do you like to listen to music when you write? What are some of your go to songs?

Life would be unimaginable without books or music.

When I have the house to myself and I can really relax and write I like moody, dark soundtracks or instrumentals. Lyrics distract me. 28 Days Later. Dexter. Call of Duty Black Ops – Zombies. The xx. Also, anything that reminds me of a time when I was frightened. John Carpenter’s Halloween and The Exorcist. Ooga booga.

When I’m around actual human beings, in the car or around the house, we listen to a pretty wide variety. Stevie Nicks was on a loop while I wrote for MAY. My daughters added another lady to their book of queens.

Right now, I’m working on a character who is a shell of a human. So much trauma and fear. I needed to climb into this guy’s head, maybe remember a time when I was on the edge.

Man, if you need to know what a chaotic mind sounds like listen to Twenty One Pilots. They’ve captured the sound of pandemonium. Putting all that fear and anxiety out there is a brave thing and I love their music. Panic at the Disco. Crazy Equals Genius is a real kick. On a side note, I got to teach my girls all about the real story of the Beach Boys because of this song. Minds blown. Sounds of Silence by Disturbed.

Same thing I do every day, Pinky. Pancakes. Coffee. Take over the world.