If you’re in the market for some killer “Summer Reads,” look no further than the latest episode of the Writer Types crime/mystery podcast.

For this episode we interviewed a handful of indie booksellers from around the U.S. to hear what they are most excited to read in the next few months. Our panel of well-read experts includes Tom Wickersham from The  Mysterious Bookshop (New York, NY), Meg King-Abraham and Devin Abraham from Once Upon A Crime (Minneapolis, MN), Anne Saller from Book Carnival (Orange, CA), and Scott Montgomery of BookPeople/MysteryPeople (Austin, TX). Plus we hear from our resident reviewers, Kate and Dan Malmon.

We’ve also got great interviews with Meg Gardiner (“Unsub”), John Rector (“The Ridge”), Jordan Harper (“She Rides Shotgun”) and Thomas Pluck (“Bad Boy Boogie”). All that plus a short story by Angel Colon.

If you like what you hear in this episode, or any of the previous episodes, please leave a review and subscribe on iTunes, Stitcher and Soundcloud. It’s the best way to help other people discover our podcast.

END_OF_DOCUMENT_TOKEN_TO_BE_REPLACED 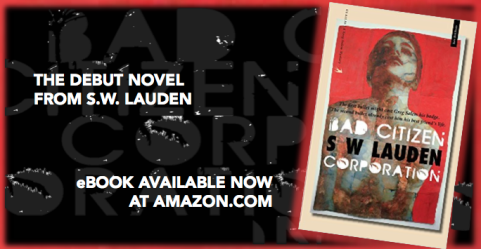 “BAD CITIZEN CORPORATION is more of a cerebral pleasure than an adrenaline rush or an all-out emotional experience, but it is a sneaky and sophisticated mystery that will please even the most die-hard fans of the genre. Hilary Davidson finally has some competition for best mystery writer in the business!”—Benoit Lelievre for Dead End Follies

“Like the best punk song ever played, Bad Citizen Corporation is raw and unpolished, it rips and roars, screams and pounds.”—Josh Stallings, author of YOUNG AMERICANS

“In the end, I want more Greg Salem. I want to find out about a few of the other mysteries in his life and I definitely want to see his Los Angeles again. I especially want to see him kick ass on stage a few more times. I’m absolutely psyched to see what Lauden has next (we should be seeing more very soon from Down & Out Books, if I remember correctly). He’s a talent out of the west coast to watch for.”—Angel Luis Colon for MyBookishWays

“Tight as a snare drum and as lean and mean as early Pelecanos, Bad Citizen Corporation is the dog’s bollocks.”—Paul D. Brazill, author of KILL ME QUICK!

“There is nothing better than finding a debut novel with strong recommendations from authors you dig and having the novel read like it was written by a seasoned pro. In other words, picking up Bad Citizen Corporation by S.W. Lauden is gonna make a lot of readers very happy.”—Derrick Horodyski for Out of the Gutter