What: The author of the multi-award winning Moses McGuire crime novels, BEAUTIFUL, NAKED & DEAD, OUT THERE BAD and ONE MORE BODY. And YOUNG AMERICANS, a ‘70’s glitter-rock disco heist novel coming September 2015. His short fiction has appeared in Beat to a Pulp, Blood and Tacos, Shotgun Honey, Protectors Anthology #1 & #2, Crime Factory and more. He lives with his wife Erika, two dogs and a cat named Riddle.

You have published three novels featuring Moses McGuire, a suicidal strip club bouncer. How did you conceive of this character? How did you create his mix of interesting character traits? 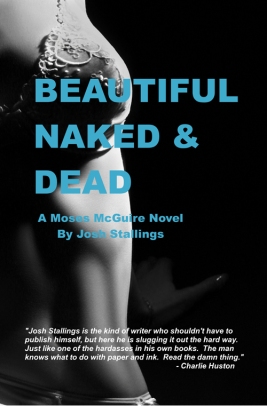 I knew I wanted to write about thugs and drunks, strippers and criminals, wholesome types like I grew up with. I was raised in the counterculture, think Leave it to Beaver directed by Federico Fellini. In my teen years Martin Scorsese took over the helm. I write for the outsiders.

Years ago a smart ass NY agent told me I would sell BN&D if I gave it a clean-cut protagonist, someone people could see my world through. I’m sure he was correct, but I wasn’t writing it for him.

What the fuck was the question? Oh yeah, where did Moses come from. Moses’ chassis was built on the tarnished knight archetype of Raymond Chandler. His drunken bull in a Stop-N-Go echoes my love of James Crumley. His bullmastiff was borrowed from Andrew Vachss. I say steal from the best. His suicidal tendencies came from asking myself who was the scariest man in the room? The one who doesn’t give a fuck if he makes it home for Christmas. That and I know a lot about self annihilation and solo boxing. Not that I thought about any of this while writing it. I just started on page one and typed until it was done. Then rewrote and rewrote and rewrote… until the prose stopped sucking.