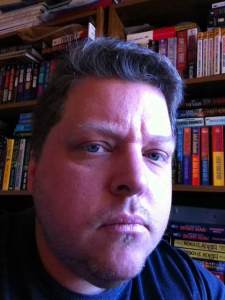 What: Greg Barth is the author of SELENA, DIESEL THERAPY, SUICIDE LOUNGE, as well as the forthcoming ROAD CARNAGE and EVERGLADE.

I just read SELENA and found it really hard to put down. It was a total punch to the gut. Tell me how this character and this story came together for you?

That story started with a single idea. There’s a tired trope in slasher movies where the victim frantically attempts to get away while being stalked. She finally makes it to a car, gets inside, fumbles with the keys, drops them, and—while the slasher’s shadow looms over the car window and squeaky slasher music plays louder and faster—attempts to start the car. And the ignition never works. Never. It just grinds and grinds while the victim’s foot taps the gas pedal. “Come on!” she says.

In my twist on this scene, she’s unable to start the car because it’s equipped with an ignition interlock device, and she’s not sober enough to unlock the switch. It seemed like a funny idea, but I also knew the consequences of being caught would be severe. And there’s no slasher, but it’s quite bad.

The character, Selena, comes from a hundred different places—pieces of people I’ve known over the years—but the two most prominent literary influences are Stieg Larsson’s Lisbeth Salander and Ken Bruen’s Jack Taylor. I remember thinking during an all-out binge of the Taylor novels, “This kind of character would never work as a woman.” The idea stuck, and it became a challenge.