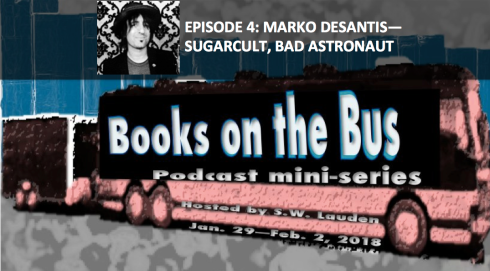 For the fourth episode of this podcast mini-series about the intersection of rock and reading, we’re hitting the road with Marko DeSantis.

He’s probably best known as the lead guitarist for Sugarcult, but Marko has also played with Bad Astronaut, The Ataris and Nerf Herder. These days your likely to catch him DJing at a club in LA or Tokyo, or find him lecturing about the entertainment industry at a handful of Los Angeles music colleges.

This episode features discussions about everything from PLEASE KILL ME and HAMMER OF THE GODS, to THE OLD MAN AND THE SEA by Ernest Hemingway, FOREVER by Judy Blume and OH, THE PLACES YOU’LL GO by Dr. Seuss. Buckle your seat belts because we cover a lot of highway with this one.

Here is Books on the Bus, episode 4:

I launched the Books on the Bus podcast mini-series on Monday with Jeff Whalen of Tsar, followed by Joey Cape of Lagwagon on Tuesday, and Todd Pasternack of Ominous Seapods, Marlow and Bump on Wednesday. I’m posting a new episode every day this week (January 29 to February 2) over on Rare Bird Radio. Our final guest on Friday is Jim Lindberg from Pennywise.